A Condensed History of St Augustine’s

Religion first came to the Wodonga area with travelling clergymen who ministered without such visible signs of faith as fine churches, Father Charles Lovat, for instance, arrived from Yass in November 1843 and said mass in the Huon family home, Belvoir, on the elevated site where Cambourne now stands.

But Wodonga’s Roman Catholics eventually built what seems to have been the town’s first church, on land granted in 1854. In 1860 there were reported to be great complaints and dissatisfaction about the lack of a Protestant church in Wodonga. ‘We certainly think our Roman Catholic friends have set us an example in this matter, and we should do well to follow it’, an Albury Banner writer observed.

A one room wooden school building was built in 1876 and staffed by two lay-teachers. These two lay teachers, Miss Fagan and Miss O’Leary kept the school running until the arrival of the Mercy Sisters in 1892.

The Mercy sisters used to come across the river to operate the school. Mother Celestine used to tell of their journey across the Murray, with their tin trunks piled in the front of the cab. It used to be necessary to stop at Custom’s House although they were let through without paying a fee.

The school opened officially in 1899 as St. Augustine’s up until this time it had been called St. Joseph’s which was the name of the convent.

The Parish of Wodonga was separated from Chiltern in 1899 and the first Parish Priest was father James Ryan. The present St. Augustine’s was blessed and opened on 27 April 1902 during his pastorship.

When Father Ryan was transferred to Elmore in 1906 Father David Tobin became pastor until he went to Euroa in 1908. His successor was Father Francis Flynn who stayed in charge for twenty-nine years. During that time the church was extended. The marble altar was built in 1918-19 and the beautiful stained-glass windows were donated at about the same time.

Twenty years after the school officially opened, a tiny eighteen year old Irish girl, Sr. Justina Upton arrived as one of the 18 nuns. For all but a short time in her life, Sr. Justina taught at St Augustine’s. She was the proud coach of the football team. Sr. Justina died during the 64th year of her religious profession.

Major refurbishments were completed in 1927 and St. Augustine’s provided education up to Intermediate Certificate level.

Father Awburn became parish priest in 1937 and stayed until 1959. The boarding school was closed in 1959. In 1958 the school enrolment was 528 and extra buildings were provided with the completion of Osburn Lodge. This was sold in 1975.

In 1971 the school continued as coeducational primary school but a girls only secondary school. Boys returned to the site in 1977.

St. Augustine’s became a Primary School in 1976 with the opening of Catholic College.

Major refurbishments were again undertaken in 1989 with the further addition of the Multi Purpose Room in 1993 and the Arts area in 1995.

In 2001 the convent area was partly refurbished into new administration offices for the school and a covered area was added to the front entrance at the start of the 2003 school year. Classroom portables were moved to the South fence.

In 2009 as part of the Building Education Revolution, St. Augustines received money from the Federal Government to build their performing arts centre and upgrade several rooms in the main building. The PAC comprised of a Art room, multipurpose room/music room and catering facilities. They were finished in 2010 and were opened by Father Denis Crameri.

2012 saw the refurbishment of the upstairs rooms in the main building. The new senior learning centre was designed allowing for new, modern teaching and learning strategies to be implemented with one to one laptops.

In 2015 a new Foundation Learning Centre was constructed. The building features a variety of learning spaces that allow for the contemporary learning approach that is implemented as part of our whole school philosophy. 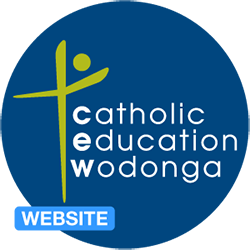